“In the blazing heat of this Mediterranean afternoon, nothing rests. Against a ground scored as if by some invisible torrent, intense green olive trees twist and crimp, capped by the rolling, dwindling hillocks of the distant Alps, beneath a light-washed sky with a bundled, ectoplasmic cloud.” 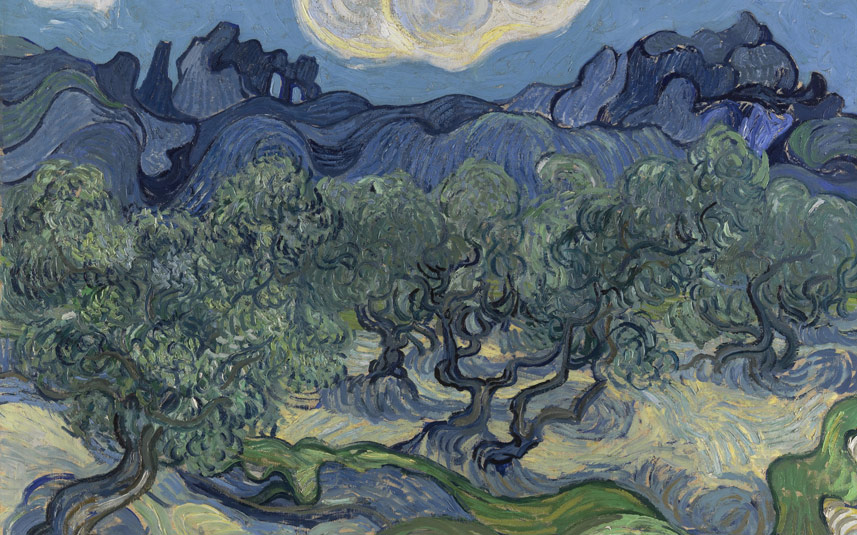 This is the Museum of Modern Art’s stunning introduction to Olive Trees in a Mountainous Landscape - Van Gogh’s tribute to the trees which produce the lush, ripe fruits we use to make nutritious extra virgin olive oil.

Though painted as a companion piece to the infamous The Starry Night, Olive Trees in a Mountainous Landscape has garnished far less interest or acclaim - despite its legendary use of color and form.

Van Gogh’s preferred technique bucked the tendency of period painters to produce picture-perfect landscapes, produced with photographic accuracy. In his own words, he wanted to go beyond “the photographic and silly perfection of some painters” 1, reaching for a vibrant intensity of experience which could not otherwise be achieved.

He sent both paintings to his brother Theo, with a letter describing the pair as perfectly complementary. "The olive trees with the white cloud and the mountains behind, as well as the rise of the moon and the night effect, are exaggerations from the point of view of the general arrangement; the outlines are accentuated as in some old woodcuts." 2 He felt that the side-by-side representation of day and night offered balance and perspective to the viewer, and intended that they be presented as a pair.

Though the most famous of his portrayals, this particular painting was by no means his only depiction of natural life. In fact, Van Gogh was somewhat obsessed with a landscape dominated by the gnarled, thick trunks of the trees grown for producing life-giving, nutritious extra virgin olive oil. He described his endless fascination with the olive groves surrounding his self-imposed asylum quite poetically, stating -

“The effect of daylight and the sky means there are endless subjects to be found in olive trees. For myself, I look for the contrasting effects in the foliage, which changes with the tones of the sky. At times, when the tree bares its pale blossoms and big blue flies, emerald fruit beetles and cicadas in great numbers fly about, everything is immersed in pure blue. Then, as the bronzer foliage takes on more mature tones, the sky is radiant and streaked with green and orange, and then again, further into autumn, the leaves take on violet tones something of the color of a ripe fig, and this violet effect manifests itself most fully with the contrast of the large, whitening sun within its pale halo of light lemon. Sometimes, too, after a shower I've seen the whole sky pink and orange, which gave an exquisite value and coloring to the silvery gray-greens. And among all this were women, also pink, who were gathering the fruit.” *

Over the course of one year, Van Gogh painted more than 150 canvases. Nineteen of these were finished works, focused on the olive trees themselves - while several additional works paid homage to the harvest of the ripe fruits, which would later be used to make nutritious extra virgin olive oil. The series included a few of Van Gogh’s most notable final works, as he passed away within one year of their completion.

Now scattered amongst the museums of the world, this collection of works examines the beauty of olive groves and trees with astounding admiration. The National Gallery of Art offers a beautifully candid summary of their appeal:

“In the olive trees — in the expressive power of their ancient and gnarled forms — van Gogh found a manifestation of the spiritual force he believed resided in all of nature. His brushstrokes make the soil and even the sky seem alive with the same rustling motion as the leaves… The energy in their continuous rhythm communicates to us, in an almost physical way, the living force that van Gogh found within the trees themselves, the very spiritual force that he believed had shaped them.” 4

Van Gogh’s own words were reflective. In a letter to his brother, in which he described his fascination with olive trees as subject, he noted that he found painting these olive groves to be both endlessly challenging and compelling. “The rustle of the olive grove has something very secret in it, and immensely old,” he wrote. “It is too beautiful for us to dare to paint it, or to be able to imagine it." 5

Olive Trees in a Mountainous Landscape is currently on display at the New York Museum of Modern Art. To view digital images of other works in the series, or discover locations of exhibition, please visit the Van Gogh Olive Trees Wikipedia.